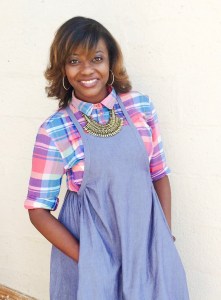 Quaneshia is the eldest of two children born into a line of ministers, educators, and musicians.Â  She was born in Vicksburg, Mississippi, but grew up in various parts of Northern Louisiana.

Quaneshia attended Grambling State University and obtained dual degrees in Accounting and Computer Information Systems. Six months prior to graduation, she was offered a position as an IT auditor with one of the most prestigious, Big 4 Accounting firms in the world in the great city of Houston, TX. In Houston, she vastly developed as a business professional as well as a dedicated her services in church ministry while attending Higher Dimension Church.

After four years of climbing the corporate ladder, she was abruptly laid off from her job of four years during the downturn of the US economy. While waiting for the next door of opportunity to open, she continued to spend Â time becoming even more involved in ministerial and community volunteer opportunities.

It was at this time that a step of faith would allow her feet to tread upon unimaginable territories and walk through doors of opportunity. What was supposed to be a three month visit with family in the Midwest state of Indiana, turned into five years of not only educational growth, but spiritual growth. During this time, Quaneshia was not only able to obtain a Masters in Business Administration at Indiana Wesleyan University, but fulfilled a life long dream of working for a music record label where she served as Marketing Assistant for Tyscot Records, the oldest black owned gospel record labels the nation. However, her gift unexpectedly made room for her when she was granted the opportunity to serve as praise and worship leader at Rock Community Church, where she lead the congregation in spiritual songs and hymns on a weekly basis.

Towards the end of her time in Indianapolis IN, Quaneshia witnessed the power of restoration as she was able to reclaim her position as a sought after IT professional by becoming an IT Compliance Analyst for Navient. Shortly after her one year anniversary, another unexpected life shifting moment occurred when she was granted the opportunity to once again work for her former Big 4 Firm in the area where its all began, Northern Louisiana.

Quaneshia currently resides in her hometown of Ruston, LA where she is actively sitting for the Uniformed Certified Public Accountant (CPA) exam.Â Â She also spends time serving as a youth leader, teacher, and worshipper within her local church. When sheâ€™s not pursuing other ventures or making preparation for future endeavors, she enjoys spending time with family andÂ  friends, serving the less fortunate, escaping to the sounds of music, as well as writing!